Now, we talk about the dynamic connectivity problem, the model of the problem for union find. Here is the idea. They are going to have a set of N objects. Doesn't really matter what they are, we use the numbers, 0 through N to model our objects. And then, we have the idea of a connection between two objects. And, we postulate that there is a command that says, connect two objects. Given two objects, provide a connection between them. And then key part of the problem is find query or the connected query, which just asks, is there a path connecting the two objects.

So, that's our problem, to be able to officially support these two commands for given set of objects.

Now, let's say we add union(5,0), union(7,2), union(6,1). So, now if we ask our 0 connected to 7, we are going to answer yes. So that's our problem, intermix union commands and connected queries and we need to be able to officially support those commands for a large number of objects.

Here is a much bigger example. We would like to ask is that is there any path between p and q? You can see that we are going to need efficient algorithms and a computer for this. It would take quite, quite some times for a human to figure out this. 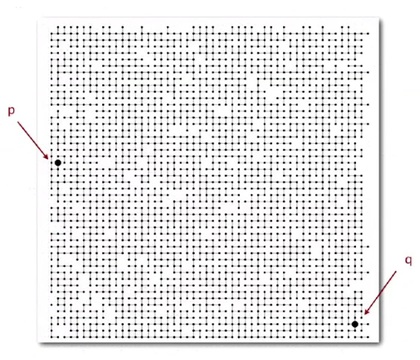 In this case, there is a connection. 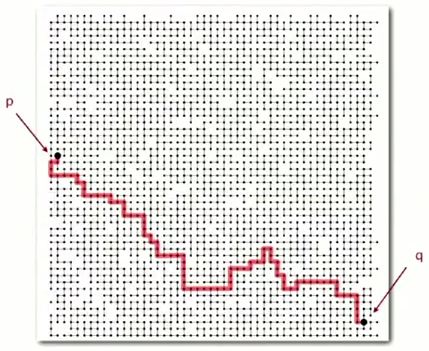 Applications (How to model the problem?)

For programming, it is convenient to name objects 0 to N-1

We assume "is connected to" is an equivalent relation:

Connected components. Maximal set of objects that are mutually connected. 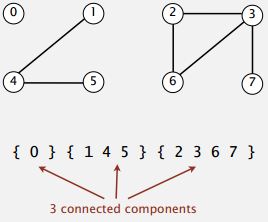