Computers use a fixed number of bits to represent an integer. The commonly-used bit-lengths for integers are 8-bit, 16-bit, 32-bit or 64-bit. Besides bit-lengths, there are two representation schemes for integers:

You, as the programmer, need to decide on the bit-length and representation scheme for your numbers, depending on your application's requirements. Suppose that you need a counter for counting a small quantity from 0 up to 200, you might choose the 8-bit unsigned integer scheme as there is no negative numbers involved.

In all the above three schemes, the most significant bit (msb) is called the sign bit, which is used to represent the sign of the integer - with 0 for positive integers and 1 for negative integers. The magnitude of the integer, however, is interpreted differently. 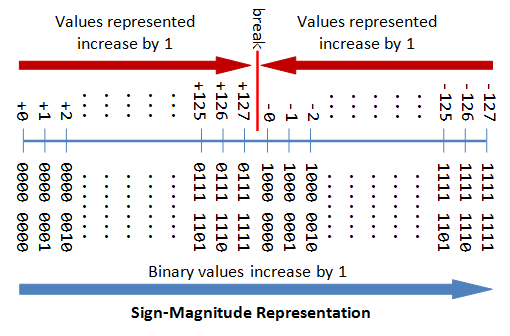 Take note that there are two representations (0000 0000B and 1000 0000B) for the number zero. Furthermore, positive numbers and negative numbers need to be processed separately. 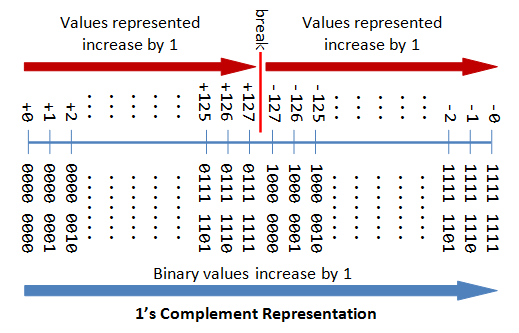 Again, take note that there are again two representations (0000 0000B and 1111 1111B) for zero. The positive integers and negative integers need to be processed separately. 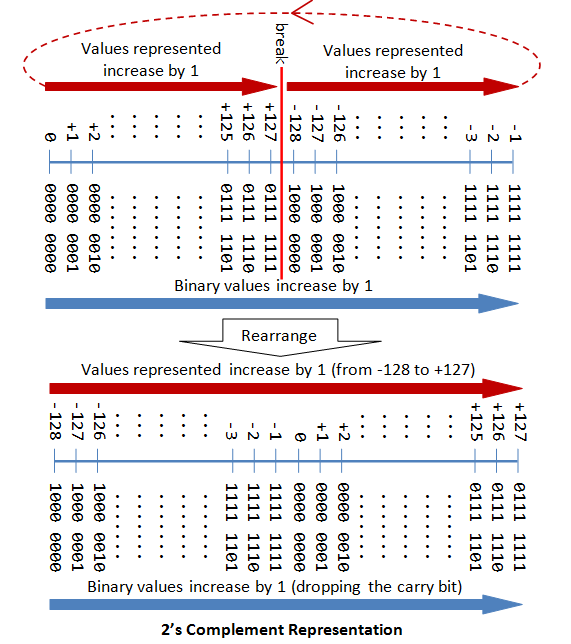 The following diagram explains how the 2's complement works. By re-arranging the number line, values from -128 to +127 are represented contiguously by ignoring the carry bit.

An n-bit 2's complement signed integer can represent integers from -2^(n-1) to +2^(n-1)-1, as tabulated. Take note that the scheme can represent all the integers within the range, without any gap (i.e., there is no missing integers inside the supported range).

It is important to note that floating-point numbers suffer from loss of precision when represented with a fixed number of bits (e.g., 32-bit or 64-bit). This is because there are infinite number of real numbers (even within a small range of says 0.0 to 1.0). On the other hand, a n-bit binary pattern can represent a finite 2^n distinct numbers. Hence, not all the real numbers can be represented. The nearest approximation will be used instead, resulted in loss of accuracy.

It is also important to note that floating number arithmetic is very much less efficient than integer arithmetic (which could be speed up with a so-called floating-point co-processor). Hence, use integers if your application does not require floating-point numbers.

The representation scheme for 64-bit double-precision is similar to the 32-bit single-precision:

There are three parts in the floating-point representation:

Take note that n-bit pattern has a finite number of combinations (=2^n), which could represent finite distinct numbers. It is not possible to represent the infinite numbers in the real axis (even a small range says 0.0 to 1.0 has infinite numbers). That is, not all floating-point numbers can be accurately represented. Instead, the closest approximation is used, which leads to loss of accuracy.

The minimum and maximum normalized floating-point numbers are:

If E = 0, but the fraction is non-zero, then the value is in denormalized form, and a leading bit of 0 is assumed, as follows:

Denormalized form can represent very small numbers closed to zero, and zero, which cannot be represented in normalized form, as shown in the above figure.

The minimum and maximum of denormalized floating-point numbers are:

Note For Java Users: You can use JDK methods Float.intBitsToFloat(int bits) or Double.longBitsToDouble(long bits) to create a single-precision float or double-precision double with the specific bit patterns, and obtain the above values. For examples,

Not a Number (NaN): NaN denotes a value that cannot be represented as real number (e.g. 0/0). NaN is represented with Exponent of all 1's (E = 255 for single-precision and E = 2047 for double-precision) and a non-zero fraction.

For example, in ASCII (as well as Latin1, Unicode, and many other character sets):

It is important to note that the representation scheme must be known before a binary pattern can be interpreted. E.g., the 8-bit pattern "0100 0010B" could represent anything under the sun known only to the person encoded it.

ISO/IEC-8859 is a collection of 8-bit character encoding standards for the western languages.

ISO/IEC 8859-1, aka Latin alphabet No. 1, or Latin-1 in short, is the most commonly-used encoding scheme for western european languages. It has 191 printable characters from the latin script, which covers languages like English, German, Italian, Portuguese and Spanish. Latin-1 is backward compatible with the 7-bit US-ASCII code. That is, the first 128 characters in Latin-1 (code numbers 0 to 127 (7FH)), is the same as US-ASCII. Code numbers 128 (80H) to 159 (9FH) are not assigned. Code numbers 160 (A0H) to 255 (FFH) are given as follows:

Beside the standardized ISO-8859-x, there are many 8-bit ASCII extensions, which are not compatible with each others.

ANSI () (aka Windows-1252, or Windows Codepage 1252): for Latin alphabets used in the legacy DOS/Windows systems. It is a superset of ISO-8859-1 with code numbers 128 (80H) to 159 (9FH) assigned to displayable characters, such as "smart" single-quotes and double-quotes. A common problem in web broswers is that all the quotes and apostrophes (produced by "smart quotes" in some Microsoft software) were replaced with question marks or some strange symbols. It it because the document is labelled as ISO-8859-1 (instead of Windows-1252), where these code numbers are undefined. Most modern browsers and e-mail clients treat charset ISO-8859-1 as Windows-1252 in order to accommodate such mislabeling.

Unicode aims to provide a standard character encoding scheme, which is universal, efficient, uniform and unambiguous. Unicode standard is maintained by a non-profit organization called the Unicode Consortium (@www.unicode.org). Unicode is an ISO/IEC standard 10646.

Unicode originally uses 16 bits (called UCS-2 or Unicode Character Set - 2 byte), which can represent up to 65,536 characters. It has since been expanded to more than 16 bits, currently stands at 21 bits. The range of the legal codes in ISO/IEC 10646 is now from U+0000H to U+10FFFFH (21 bits or about 2 million characters), covering all current and ancient historical scripts. The original 16-bit range of U+0000H to U+FFFFH (65536 characters) is known as Basic Multilingual Plane (BMP), covering all the major languages in use currently. The characters outside BMP are called Supplementary Characters, which are not frequently-used.

The 16/32-bit Unicode (UCS-2/4) is grossly inefficient if the document contains mainly ASCII characters, because each character occupies two bytes of storage. Variable-length encoding schemes, such as UTF-8, which uses 1-4 bytes to represent a character, was devised to improve the efficiency. In UTF-8, the 128 commonly-used US-ASCII characters use only 1 byte, but some less-commonly characters may require up to 4 bytes. Overall, the efficiency improved for document containing mainly US-ASCII texts.

The transformation between Unicode and UTF-8 is as follows:

In UTF-8, Unicode numbers corresponding to the 7-bit ASCII characters are padded with a leading zero; thus has the same value as ASCII. Hence, UTF-8 can be used with all software using ASCII. Unicode numbers of 128 and above, which are less frequently used, are encoded using more bytes (2-4 bytes). UTF-8 generally requires less storage and is compatible with ASCII. The drawback of UTF-8 is more processing power needed to unpack the code due to its variable length. UTF-8 is the most popular format for Unicode.

UTF-16 is a variable-length Unicode character encoding scheme, which uses 2 to 4 bytes. UTF-16 is not commonly used. The transformation table is as follows:

Take note that for the 65536 characters in BMP, the UTF-16 is the same as UCS-2 (2 bytes). However, 4 bytes are used for the supplementary characters outside the BMP.

Same as UCS-4, which uses 4 bytes for each character - unencoded.

Unicode text files could take on these formats:

UTF-8 file is always stored as big endian. BOM plays no part. However, in some systems (in particular Windows), a BOM is added as the first character in the UTF-8 file as the signature to identity the file as UTF-8 encoded. The BOM character (FEFFH) is encoded in UTF-8 as EF BB BF. Adding a BOM as the first character of the file is not recommended, as it may be incorrectly interpreted in other system. You can have a UTF-8 file without BOM.

Line Delimiter or End-Of-Line (EOL): Sometimes, when you use the Windows NotePad to open a text file (created in Unix or Mac), all the lines are joined together. This is because different operating platforms use different character as the so-called line delimiter (or end-of-line or EOL). Two non-printable control characters are involved: 0AH (Line-Feed or LF) and 0DH (Carriage-Return or CR).

Character encoding scheme (charset) in Windows is called codepage. In CMD shell, you can issue command "chcp" to display the current codepage, or "chcp codepage-number" to change the codepage.

Unicode supports all languages, including asian languages like Chinese (both simplified and traditional characters), Japanese and Korean (collectively called CJK). There are more than 20,000 CJK characters in Unicode. Unicode characters are often encoded in the UTF-8 scheme, which unfortunately, requires 3 bytes for each CJK character, instead of 2 bytes in the unencoded UCS-2 (UTF-16).

Worse still, there are also various chinese character sets, which is not compatible with Unicode:

For example, the world is made more interesting with these many standards:

Notes for Windows' CMD Users: To display the chinese character correctly in CMD shell, you need to choose the correct codepage, e.g., 65001 for UTF8, 936 for GB2312/GBK, 950 for Big5, 1201 for UCS-2BE, 1200 for UCS-2LE, 437 for the original DOS. You can use command "chcp" to display the current code page and command "chcp codepage_number" to change the codepage. You also have to choose a font that can display the characters (e.g., Courier New, Consolas or Lucida Console, NOT Raster font).

A string consists of a sequence of characters in upper or lower cases, e.g., "apple", "BOY", "Cat". In sorting or comparing strings, if we order the characters according to the underlying code numbers (e.g., US-ASCII) character-by-character, the order for the example would be "BOY", "apple", "Cat" because uppercase letters have a smaller code number than lowercase letters. This does not agree with the so-called dictionary order, where the same uppercase and lowercase letters have the same rank. Another common problem in ordering strings is "10" (ten) at times is ordered in front of "1" to "9".

Collating sequence is often language dependent, as different languages use different sets of characters (e.g., á, é, a, α) with their own orders.

JDK 1.4 introduced a new java.nio.charset package to support encoding/deconding of characters from UCS-2 used internally in Java program to any supported charset used by external devices.

Example: The following program encodes some Unicode texts in various encoding scheme, and display the Hex codes of the encoded byte sequences.

For Java Programmers - char and String

Recall that in the UTF-16 encoding scheme, a BMP characters uses 2 bytes. It is the same as UCS-2. A supplementary character uses 4 bytes. and requires a pair of 16-bit values, the first from the high-surrogates range, (\uD800-\uDBFF), the second from the low-surrogates range (\uDC00-\uDFFF).

In Java, a String is a sequences of Unicode characters. Java, in fact, uses UTF-16 for String and StringBuffer. For BMP characters, they are the same as UCS-2. For supplementary characters, each characters requires a pair of char values.

This is meant to be an academic discussion. I have yet to encounter the use of supplementary characters!

At times, you may need to display the hex values of a file, especially in dealing with Unicode characters. A Hex Editor is a handy tool that a good programmer should possess in his/her toolbox. There are many freeware/shareware Hex Editor available. Try google "Hex Editor".

I used the followings:

Let me know if you have a better choice, which is fast to launch, easy to use, can toggle between Hex and normal view, free, ....

The following Java program can be used to display hex code for Java Primitives (integer, character and floating-point):

Give the values for the following 16-bit codes, if they are representing:

Summary: Why Bother about Data Representation?

Integer number 1, floating-point number 1.0 character symbol '1', and string "1" are totally different inside the computer memory. You need to know the difference to write good and high-performance programs.