This is called Central Limit Theorem because it is central to much of the statistical inference theory. So, the CLT tells us about 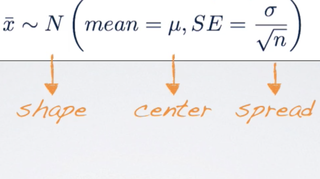 If σ (σ is the population SD) is unknown, we use S, the sample SD, to estimate the standard error.

Note: σ is often unknown because we don't have access to the entire population to calculate σ 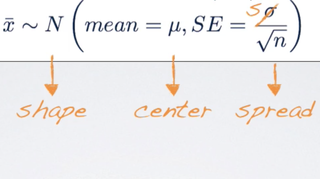 For a sample statistic - the mean, the sampling distributions of the mean, distribution of sample means from many samples, is nearly normal,

Certain conditions must be met for the Central Limit Theorem to apply. There are

The sampled observations must be independent. And this is very difficult to verify, but it is more likely, if we have used random sampling or assignment, depending on whether we have an observational study, where we're sampling from the population, randomly, or we have an experiment where we're randomly assigning experimental units to various treatments.

And if sampling without replacement, n < 10% of the population