Introduction to probability and distribution

This section will introduce the basic of probability, probability calculation for events arising from random processes and probability distributions.

Probability is a course in itself, but in here, we will just be touching on the fundamentals that are relevant for providing a conceptual framework for statistical inference.

Let's start with the definition of random process. In a random process we know what outomes could happen, but we don't know which particular outcome will happen.

Some example of random processes are:

There are several possible interpretations of probability but they almost completely agree on the mathematical rules probability must follow:

Probability of an event is always between 0 and 1. So if you get a probability result less than 0 or greater than 1, you know that you made a mistake.

Law of large numbers states that as more observations are collected, the proportion of occurences with a particular outcome converges to the probability of that outcome. 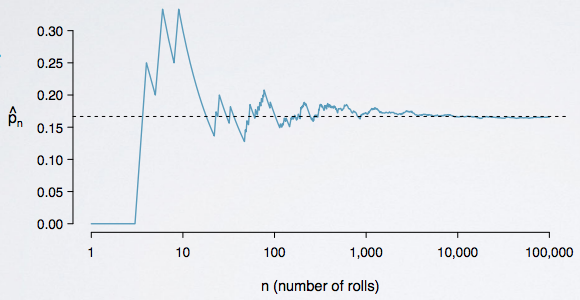