k-Nearest Neighbours (k-NN) is supervised learning that has been used in many applications in the field of data mining and pattern recognition . It classifies objects based on closest training examples in the feature space. k-NN is a type of instance-based learning where the function is only approximated locally and all computation is deferred until classification. An object is classified by a majority vote of the closest k neighbours or the distance-weighted average of the closest k neighbours if the class is numeric. If k=1, then the object is simply assigned to the class or the value of that single nearest neighbour.

In general, the k-NN algorithm is composed of the following steps:

The k-NN was trained using the WT power data A and the classification was tested using a test data with k=10 as shown in Figure 1. We found that this test data is misidentified as OK because majority of the 10 nearest data to the test data are OK. 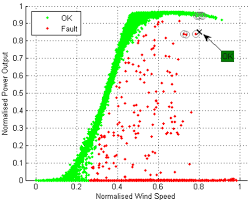 k-NN result with a data