The quotes around the web:

Another perspective on Data Science is that you should be familar with is this Venn diagram that made several years ago by Drew Conways. 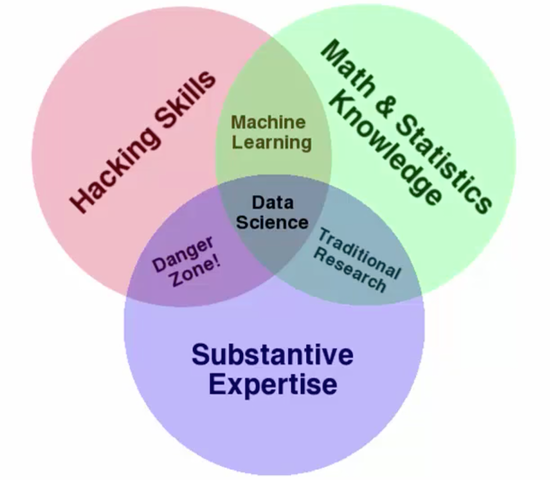 His point was that Data Science is probably the mix of three different sort of areas.

What do data scientists do?

Data scientists “tend to be “hard scientists”, particularly physicists, rather than computer science majors. Physicists have a strong mathematical background, computing skills, and come from a discipline in which survival depends on getting the most from the data. They have to think about the big picture, the big problem.”

Here is another quote from Jeffrey Stanton who teaches a course in data science at Syracuse and has involved in one of the earlier programs in data science.

“Data Science refers to an emerging area of work concerned with the collection, preparation, analysis, visualization, management and preservation of large collections of information.”

One thing interesting about his perspective includes the word preservation. While the preparation, the analytics and visualization are the three tenants that you see quite often. Jeffrey goes one step further and talks about preservations even after you're done communicating the results. What do you do with the data long term?

Another quote from thinker in Data Science is Hilary Mason, the Chief Scientist at bit.ly.

“A data scientist is someone who can obtain, scrub, explore, model and interpret data, blending hacking, statistics and machine learning. Data scientists not only are adept at working with data, but appreciate data itself as a first-class product.”

The first sentence of this quote is that in Drew Conways' Venn diagram. There is data scientist are not only adept at working with data, but can appreciate data itself as a first-class product is about be able to organize the data and actually produce something that is usable by other people.

To summarize the Data Science, there is perhaps three overarching tasks involved in Data Science:

Data Science is about Data Products

Data products empower others to use the data.

May empower others to do their own analysis (e.g., Global Burden of Disease)