In computing, the kernel is a computer program that manages input/output requests from software, translate them into data processing instructions for the central processing unit and other electronic components of a computer. 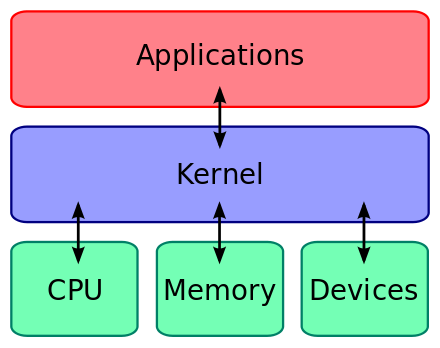 The kernel is a fundamental part of a modern computer's operating system.

The critical code of the kernel is usually loaded into a protected area of memory, which prevents it from being overwritten by other, less frequently used parts of the operating system or by applications.

This separation prevents user data and kernel data from interfering with each other and thereby diminishing performance or causing the system to become unstable and possibly crashing.

When a process makes requests of the kernel, the request is called a system call. Various kernel designs differ in how they manage system calls and resources. For example, a monolithic kernel executes all the operating instructions in the same address space in order to improve the performance of the system. A microkernel runs most of the operating system's background processes in user space, to make the operating system more modular and, therefore easy to maintain.