In practice, when the universe of discourse X is a continuous space ( the real line R or its subset ), we usually partition X into several fuzzy sets whose MFs cover X in a more or less uniform manner. These fuzzy sets, which usually carry names that conform to adjectives appearing in our daily linguistic usage, such as "large", "medium" or "small" are called linguistic values or linguistic labels. Thus, the universe of discourse X is often called linguistic variable. Here is a simple example.

Suppose that X = "age". Then we can define fuzzy sets "young", "middle aged" and "old" that are characterized by MFs μyoung(x), μmiddleaged(x) and μold(x), respectively. Just as variable can assume various values, a linguistic variable "Age" can assume different linguistic values, such as "young", "middle aged" and "old" in this case. If "age" assumes the value of "young", then we have the expression "age is young", and so forth for the other values. Typical MFs for these linguistic values are displayed in the figure below, where the universe of discourse X is totally covered by the MFs and the transition from one MF to another is smooth and gradual.

A fuzzy set A is normal if its core is nonempty. In other words, we can always find a points x ∈ X such that μA(x) = 1

A fuzzy set whose support is single point in X with x μA(x) = 1 is called a fuzzy singleton.

Figure below illustrate the cores, supports and crossover points of the bell-shaped membership function representing "middle aged" and of the fuzzy singleton characterizing "45 years old". 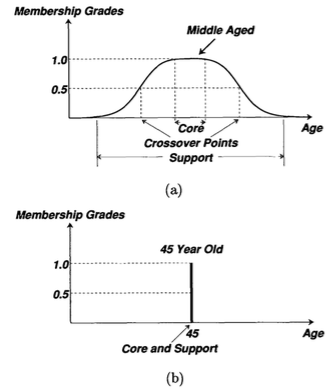 Using the notation for a level set, we can express the support and core of a fuzzy set A as

Alternatively, A is convex if all its α-level sets are convex.

which has a tigher condition.

Figure below illustrates the concept of convexity of fuzzy sets; Figure (a) shows two convex fuzzy sets, the left fuzzy set satisfies both Equations, while the right one satisfies Equation 1 only. Figure (b) is a nonconvex fuzzy set.

A fuzzy number A is a fuzzy set in the real line (R) that satisfies the conditions for normality and convexity.

Most (noncomposite) fuzzy sets used in the literature satisfy the conditions for normality and convexity, so fuzzy numbers are the most basic type of fuzzy sets.

For a normal and convex fuzzy set, the bandwidths or width is defined as the distance between the two unique crossover points:

A fuzzy set A is

For example, the fuzzy set "young" is open left; "old" is open right; and "middle aged" is closed.