Wind Turbines can be classified into the Vertical Axis type (a) and the Horizontal Axis type (b). Most modern wind turbines use a horizontal axis configuration with two or three blades, operating either downwind or upwind. 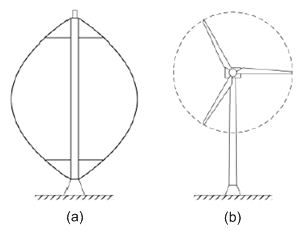 Figure: (a) Vertical (b) Horizontal

The main advantage of Vertical Axis wind turbines is that the gearbox and transmission systems are placed at ground level. Another advantage is their ability to capture the wind without considering wind direction. However, maintenance of these turbines is not straightforward as removing the rotor is often required. In addition, the captured energy is not efficient and large areas are compulsory for those turbines situated on land as guy-wire is necessary for supporting the structure.

Alternatively, the most recent wind turbines used are Horizontal Axis based with two or three blades. Having the rotor positioned on the top of the tower creates a more efficient system as more wind energy is produced. These turbines also have a nacelle, which held up by the tower and contains the gearbox and generator. A yaw system, which is turning the nacelle and rotor to face the wind, enables the turbine to capture the highest amount of energy. Additionally, some wind turbine blades have moveable blade tips, which are used as air brakes. Figure below demonstrates the components involved in a three bladed Horizontal Axis wind turbine [1]. 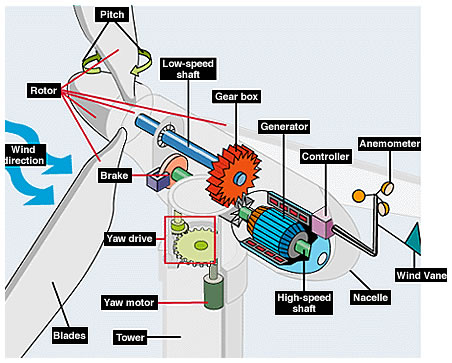 There are a significant number of large, horizontal axis, WT manufacturers in the world, > 50 and their WT designs vary from manufacturer to manufacturer. However, the sub-assemblies described above are common to almost all manufacturers and this gives confidence in taking a common approach to all WTs.

A WF is a group of WTs in the same location used to produce electric power. A large WF may contain > 100 individual WTs and cover an extended area of tens of square km. In order to harvest wind energy more efficiently, the sizes of WTs have become physically larger and the WF location are usually built in remote plains, hills or sea regions. Currently, most WFs have been sited onshore, but there is growing interest in installing them offshore to take the advantage of the strong winds and lower environmental impact offered by offshore locations.

In UK, the government has set a target to produce 20% of electrical energy from renewable sources by 2020. According to [3], offshore wind power could contribute up to 19% of the UK renewable energy target by 2020. UK has a big potential for offshore WF locations to achieve a greater wind energy harvest because of its island geography. However, a major issue with sitting WTs at sea is the difficulty of access and potential high cost of O&M, which could contributes to high resultant cost of energy, making the energy produced from offshore wind less competitive compared to conventional sources. In comparison with onshore, offshore O&M is more difficult and costing more than onshore, and is estimated that they may represent 20-25% of the total potential income from an offshore WF [4, 5]. This is due to the following factors:

Extreme weather conditions may reduce the ability to perform the maintenance and repair.