Turbines are designed to withstand extreme winds statically. This means that they can survive a storm, but only when they are not spinning. They are not designed for extreme rotational torques or speeds. At very large aerodynamic torques or rotational speeds, the forces on the blades and other parts of the turbine are enormous and it will literally tear the turbine apart. This is why they are always designed with a cut-out speed above which breaks will slow the turbine to a halt. However, there is s range of wind speeds before the cut-out speed where turbines employ various active and passive control strategies to deal with high wind speeds that would otherwise pose a threat to the turbines. These control strategies can broadly be classified as pitch-regulated and stall-regulated, respectively.

Pitch-regulated wind turbine have an active control system that can vary the pitch angle (turn the blade around its own axis) of the turbine blades to decrease the torque produced by the blades in a fixed-speed turbine and to decrease the rotational speed in variable-speed turbines. This type of control is usually employed for high wind speeds only (usually above the rated speed), when high rotational speeds and aerodynamic torques can damage the equipment. When wind speeds get very high (above rated power), the blades will pitch so that there is less lift and more drag due to increasing flow separation along the blade length (the blades are pitched into stall). This will slow down the turbine’s rotational speed or the torque transferred to the shaft so that the rotational speed or the torque is kept constant below a set threshold. Pitch regulated turbines see increasing power up until the rated wind speed, beyond which it sees constant power up until a cut–out speed when the pitch control is no longer able to limit the rotational speed/aerodynamic torque or where other forces like structural vibrations, turbulence or gusts pose a threat to a rotating turbine. In the graphic below, the pitch-regulated turbine is represented by the red curve: 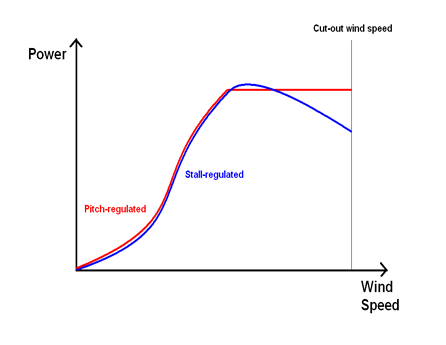