Power and Energy in Wind

The Power in Wind

The first law of thermodynamics tells us that energy can neither be created nor destroyed, but it can change forms. Anything that is in motion – such as moving air – contains a form of energy we refer to as kinetic energy. Slowing air down reduces its kinetic energy and that energy has to go somewhere. Wind turbines slow wind down and convert some of the energy to mechanical and electrical energy.

Where m stand s for mass (in kg) and V stands for velocity (in m/s). This allows us to calculate the amount of power in moving air. The power of the wind passing perpendicularly through a circular area is:

Betz’s Limit on what we can extract

A wind turbine slows air down, but it cannot remove 100% of the air’s kinetic energy – obviously the air cannot stop completely, or else it would pile up behind the turbine. In 1919, German physicist Albert Betz figured out that the upper limit to the amount of energy you can capture from the wind is 16/27 = 59%. In practice, all real wind turbines extract less than this hypothetical maximum.

The Power from a Wind Turbine

The power a turbine actually gets from the wind is:

You can see that we have added two things to the original equation of the power in the wind:

Cp must be less than the Betz limit. In practice, it varies with wind speed, turbulence and operating characteristics; for example it could be around 44% for a commercial-scale turbine, in winds of 10 m/s. A typical overall efficiency, η, would be in the range of 90%. To estimate the power output of a given commercial turbine, we do not have to use the power equation; rather we use power curves supplied by the manufacturer. 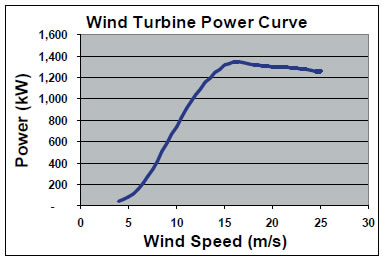 What does the power equation tell us?