The Fibonacci numbers or Fibonacci sequence are the numbers in the following integer sequence:

By definition, the first two numbers in the Fibonacci sequence are either 1 and 1, or 0 and 1, depending on the chosen starting point of the sequence, and each subsequent number is the sum of the previous two.

In mathematical terms, the sequence Fn of Fibonacci numbers is defined by the recurrence relation.

When we make squares with those widths, we get a nice spiral:

And here is a surprise. When we take any two successive (one after the other) Fibonacci Numbers, their ratio is very close to the Golden Ratio "φ" which is approximately 1.618034...

In fact, the bigger the pair of Fibonacci Numbers, the closer the approximation. Let us try a few: 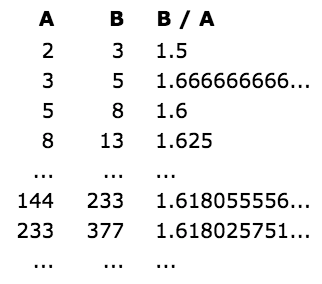 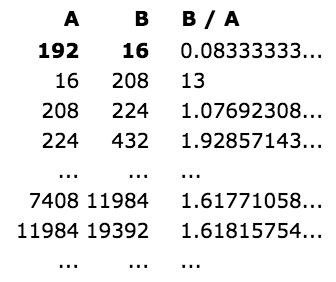 It takes longer to get good values, but it shows that not just the Fibonacci Sequence can do this.

And even more surprising is that we can calculate any Fibonacci Number using the Golden Ratio:

The answer always comes out as a whole number, exactly equal to the addition of the previous two terms.

Here is the Fibonacci numbers again:

There is an interesting pattern:

In fact the sequence below zero has the same numbers as the sequence above zero, except they follow a +-+- ... pattern.