Probability and the Normal Curve

Additionally, every normal curve (regardless of its mean or standard deviation) conforms to the following “rule”: 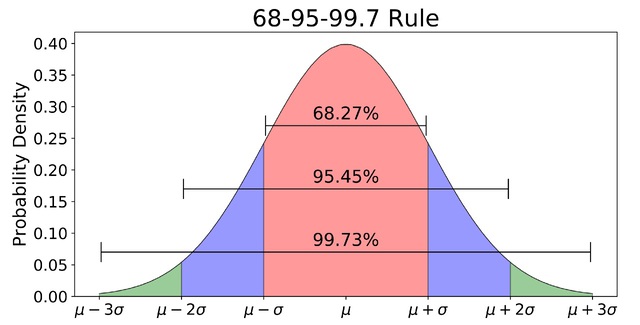 Collectively, these points are known as the empirical rule or the 68-95-99.7 rule. Clearly, given a normal distribution, most outcomes will be within 3 standard deviations of the mean.

The cumulative distribution function () describes probabilities for a random variable to fall in the intervals of the form. The standard normal distribution is denoted with the capital Greek letter (phi), and can be computed as an integral of the probability density function:

This integral can only be expressed in terms of a special function, called the error function. The numerical methods for calculation of the standard normal  are discussed below. For a generic normal random variable with mean  and variance, the  will be equal to:

The complement of the standard normal cdf, Q(x)=1- Φ(x), is referred to as the Q-function, especially in engineering texts. This represents the tail probability of the Gaussian distribution that is the probability that a standard normal random variable X is greater than the number x.