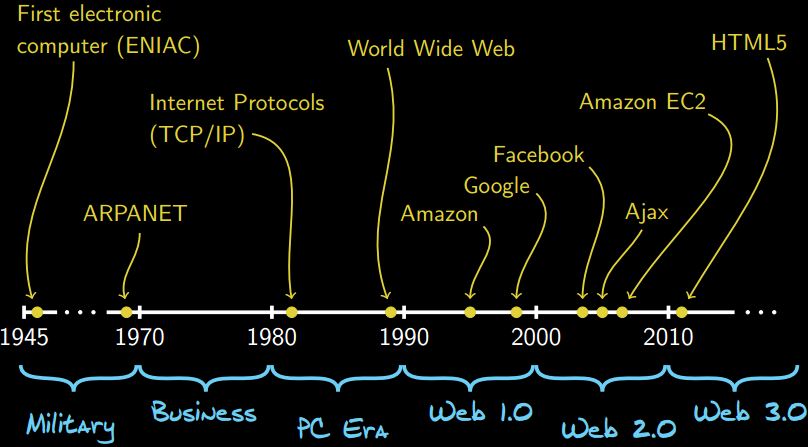 Here is a historical perspective for Web Application Architectures. Let's start with this timeline and this timeline starts in 1945, which is when computing actually started, so this is a fairly recent phenomena. And the pace of innovation in computing has been remarkable:

Early computing, was largely related to military applications. If you look at these early computers, they were computing artillery tables. And even the ARPANET was Defense Department related. In the 1970s and 80s, businesses became began to make more use of computing. And then in the 1980s through 90s, some people refer to this as the PC era. This is when the IBM PC was introduced and it became easy for anyone to purchase a computer and use it for word processing, spreadsheet applications and so forth. We see right after the founding of the World Wide Web in the creation of the World Wide Web in 1989, Web 1.0 came about and this is really kind of static web pages. And it wasn't until some of these technologies like Ajax became available that Web 2.0 was born. And Web 2.0 really led to the wide-scale adoption of the web as a computing platform for business purposes. We're now in the Web 3.0 era.

For the use of these terms Web 1.0, Web 2.0 and Web 3.0, some people really don't like that terminology because the web has been continuous, continuously evolving. But we need to introduce those terms just so that we can talk about the architectures and how they differ, as time progresses through Web 1.0, 2.0 and 3.0.

What are some of the enablers of Web 2.0 and 3.0 technologies? JavaScript is one, XML and JSON, these were the technologies that enabled this Ajax interactivity that we'll talk more about in this course. Web services became more interoperable, it became much easier to take one website, and have it use services provided by a different website. And the infrastructure, platform and software as service capabilities emerge, in other words, cloud computing became more prominent and easier to build into your web applications. Mobile platforms and apps led to to ubiquitous computing. Now you're always on and web applications can take advantage of that. They know your location. And what you might be doing in many cases if you'd like to allow that to be used, that can be used in a web app. There's metadata associated with the data on your on a website, allowing intelligent agents to process that website and perhaps make more intelligent recommendations to you. And just and that allows for machine processing of the information on the website in general.