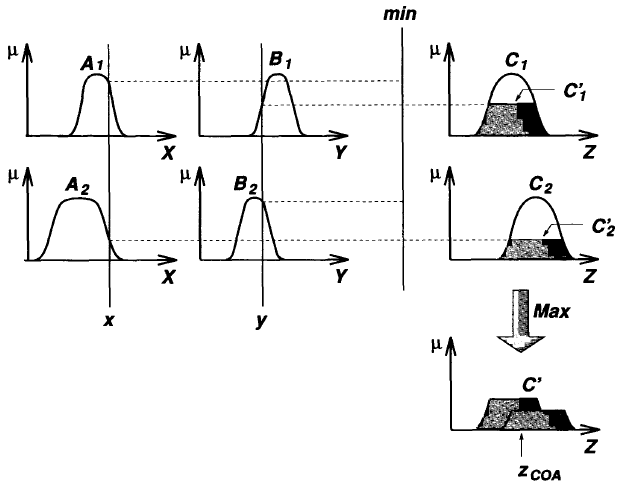 If we adopt max and algebraic product as our choice for the T-norm and T-conorm operators, respectively, and use max-product composition instead of the original max-min composition, then the resulting fuzzy reasoning is shown in Figure2, where the inferred output of each rule is a fuzzy set scaled down by its firing strength via algebraic product. Although this type of fuzzy reasoning was not employed in Mamdani's original paper, it has often been used in the literature. Other variations are possible if we use different T-norm and T-conorm operators. 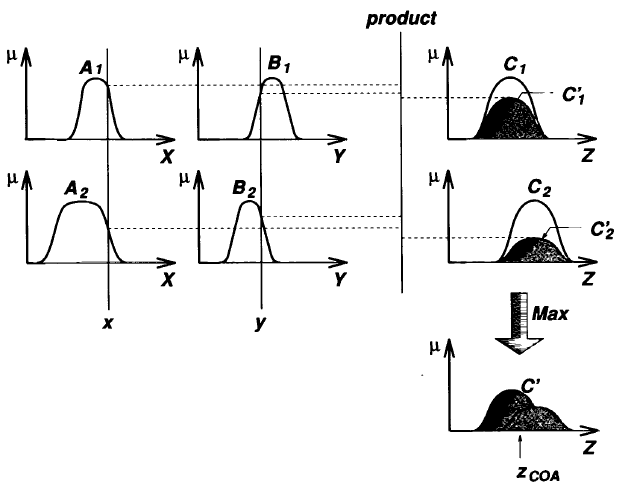 In Mamdani's application [1], two fuzzy inference systems were used as two controllers to generate the heat input to the boiler and throttle opening of the engine cylinder, respectively, to regulate the steam pressure in the boiler and the speed of the engine. Since the plant takes only crisp values as inputs, we have to use a defuzzifier to convert a fuzzy set to a crisp value.

Defuzzification refers to the way a crisp value is extracted from a fuzzy set as a representative value. In general, there are five methods for defuzzifying a fuzzy set A of a universe of discourse Z, as shown in Figure 3. (Here the fuzzy set A is usually represented by an aggregated output MF, such as C' in Figures 4.2 and 4.3).

A brief explanation of each defuzzification strategy are shown as follows:

An example of a single-input single-output Mamdani fuzzy model with three rules can be expressed as: 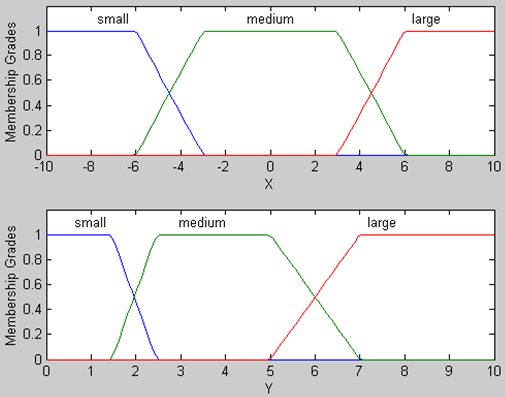 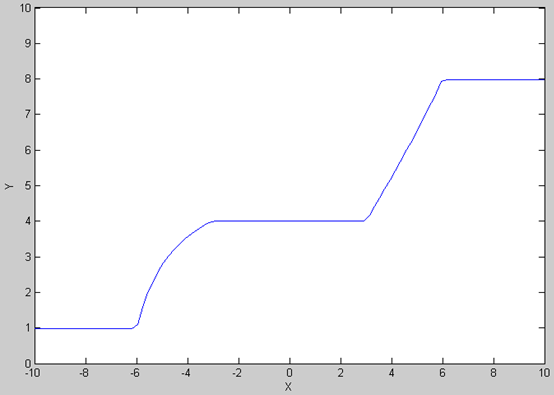 Figure 3 plots the membership functions of input X and output Y, where the input and output universe are [-10, 10] and [0, 10], respectively. With maxmin composition and centroid defuzzification, we can find the overall input-output curve, as shown in Figure 4. Note that the output variable never reaches the maximum (10) and minimum (0) of the output universe. Instead, the reachable minimum and maximum of the output variable are determined by the centroids of the leftmost and rightmost consequent MFs, respectly.

An example of a two-input single-output Mamdani fuzzy model with four rules can be expressed as: 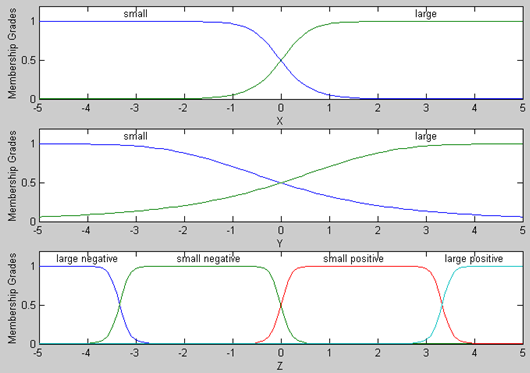 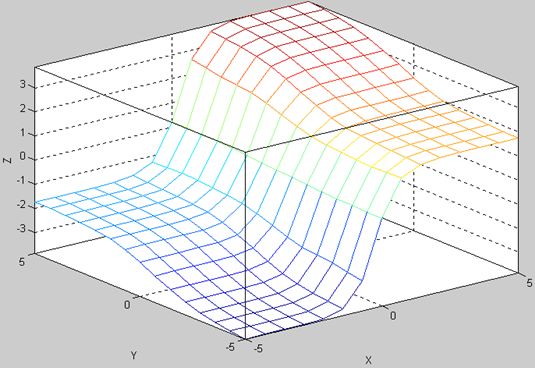 Figure 5 plots the membership functions of input X and Y and output Z, all with the same universe [-5, 5]. With max-min composition and centroid defuzzification, we can find the overall input-output surface, as shown in Figure 6. For a multiple-input fuzzy model, sometimes it is helpful to have a tool for viewing the process of fuzzy inference; Figure 7 is the fuzzy inference viewer available in the Matlab Fuzzy Logic Toolbox, where you can change the input values by click and drag the input vertical lines and then see the interactive changes of qualified consequent MFs and overall output MF.