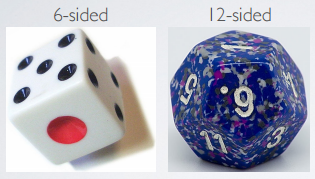 For the goal is to roll ≥4, the 12-sided die is of course the good die because its probability is 75%.

I have 2 dice, one 6-sided and the other 12-sided. I keep one die in left hand and the other in the right. But we don't know which die I'm holding in which hand. You pick a hand, left or right, I roll it. And I tell you if the outcome is ≥ 4 or not. I won't tell you what the outcome actually is. Based on this information you make a decision as to which hand holds the good, the 12-sided die. You could also choose to try again, in other words, collect more data. But each round costs you money. So you don't want to keep trying too many times. 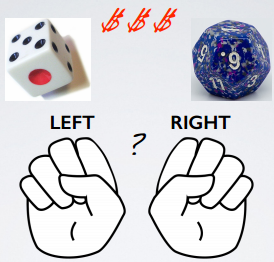 This is a game and we made up some rules, but if you think about data collection, it is always costly. We love large sample sizes, it takes a huge amount of resources to obtain such samples. So the rules we are imposing aren't haphazardly made up, and they reflect some reality about conducting scientific studies.

Let's first evaluate the possible decisions we might make.

The four possible outcomes are:

To avoid losing the game, you might want to collect as much data as possible, but that is costly as mentioned before!! So at some point before you are entirely sure, you have to just go ahead and make a guess. However, losing game also cost you, so there is a need to balance the cost associated with making the wrong decision and losing the game, against the certainty that comes with additional data collection.

Prior probabilities before collecting data

Question: Before we collect any data, you have no idea if I am holding the good die (12-sided) on the right hand or the left hand. Then, the probabilities associated with the following Hypothesis are:

You pick the right hand for the 1st round, and you roll a number ≥ 4. Having observed this data point, the probabilities for the hypothesis are changed to: 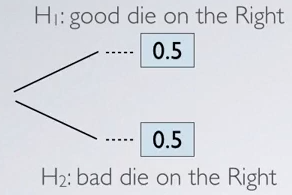 Then, in the data collection stage, 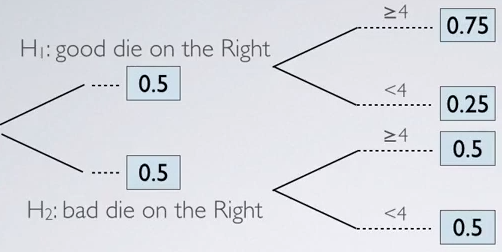 In the probability tree, the next step is to calculate the joint probabilities. So we multiply across the branches:

As we said, we did indeed roll a number > 4, so these are the 2 outcomes that we are most interested in:

This is a conditional probability, so we can make use of the Bayes theorem:

In the next roll

In the next roll, we get to take advantage of what we learned from the data. In other words, we update our prior with our Posterior probability from the previous iteration.

The Posterior probability is different from P(data | hypothesis), also called a p-value, the probability of observed or more extreme data given the null hypothesis being true.