Abstractly, the probability model for a classifier is a conditional model:

Over a dependent class variable C with a small number of outcomes or classes, conditional on several feature variables F1 though Fn. The problem is that if the number of feature n is large or when a feature can take on a large number of values, then basing such a model on probability table is infeasible. We therefore reformulate the model to make it more tractable.

In plain English the above equation can be written as:

In practice we are only interested in the numerator of that fraction, since the denominator does not depend on C and the values of the features Fi are given, so that the denominator is effectively constant. The numerator is equivalent to the joint probability model (See Bayes theorem):

which can be rewritten as follows, using repeated applications of the definition of conditional probability:

Now the “naïve” conditional independence assumptions come into play: assume that each feature Fi is conditionally independent of every other feature Fj for j≠i. For example, j≠i, k, l. the assumption means that:

So the joint model can be expressed as:

This means that under the above independence assumptions, the conditional distribution over the class variable C can be expressed like this:

Where Z (the evidence) is a scaling factor dependent only on F1,…,Fn 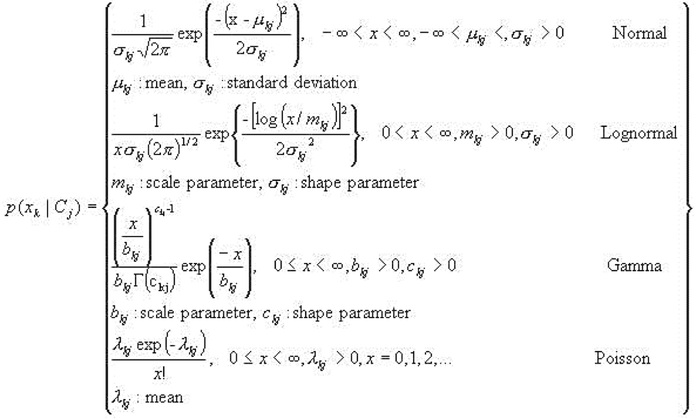 Problem: Using the following training set, classify whether a given person is a male or a female, based on the provided specifications. The known criterias are: height, weight, and foot size. 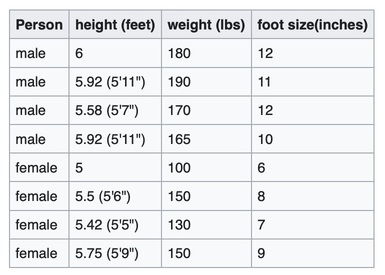 The classifier created from the above training data, using a Gaussian Distribution Assumption, would be:

Then, there is a sample to be classified as “male” or “female”:

Our goal is to determine the greater posterior, “male” or “female”.

For the classification as “male” the posterior is given by:

For the classification as “female” the posterior is given by:

Next, the evidence may be calculated:

However, in this case the evidence is a constant. Therefore, both posteriors are scaled equally. That's why it can be ignored, since it doesn't affect classification.

Let's continue to calculate the probability distribution for the sex of the sample data:

are the parameters of normal distribution which have been previously determined from the training set. Note that a value greater than 1 is OK here – it is a probability density rather than a probability, because height is a continuous variable. 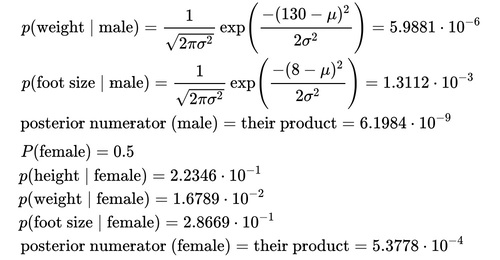 Since posterior numerator is greater in the female case, we predict the sample is female.