The Hessian Matrix is a square matrix of second-order partial derivatives of a function. It describes the local curvature of a function of many variables.

Defination from a function

Given the real-valued function f(x1, x2, ..., xn), if all second partial derivatives of f exist and are continuous over the domain of the function, then the Hessian matrix of f is

where x = (x1, x2, ..., xn) and Di is the differentiation operator with respect to the ith argument. Thus 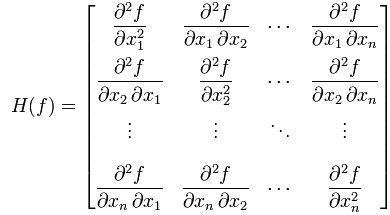 Defination from an existing Jacobian matrix

The Jacobian matrix of the derivatives

Hessian matrices are used in large-scale optimisation problems within Newton-type methods because they are the coefficient of the quadratic term of a local Taylor expansion of a function. That is

If f is instead a function from

, but rather a tensor of order 3. This can be thought of as a multi-dimensional array with dimensions

, which degenerates to usual Hessian matrix for m=1.

Note: The Vector-valued function can be found from Jacobian matrix.